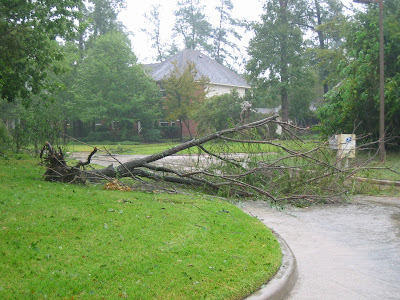 We all knew it was coming. Hurricane Ike. The day--September 12th, 2008. Just a swirl of clouds on the TV screen with a button eye in the middle, but it was big, no doubt about that. And we knew what big could do from the footage of the aftermath of Katrina.
People in authority told us to "hunker down" and stay off Houston highways trying "get outta Dodge." So we stayed and "hunkered" whatever that is, in our interior closets--full of things we forgot were in there. My husband and I hauled things out of the two closets in our master bathroom, shoved in some air mattresses, flashlights, radios, food and water and tried to get comfy.
Our teen daughters in the closet next to us slept right through the howling wind that night, proving with infallibility that teenagers can sleep through ANYTHING. My husband slept too, for a while. But I kept my eyes and ears open---listening for the train-like sounds of tornados and punishing downdrafts. All I heard though were howls and snapping branches, things bumping against the house and windows, and the pelting rain. Our power went out at 6:30 am central standard time. After that, civilization and life as we knew it, began to disintegrate.
The morning after, we discovered neighbors we barely knew before the storm, wandering in the rain assessing the damage. There were lots of downed trees and branches in the road, leaning against homes and resting over SUVs. Tentative cleanup began, with neighbor helping neighbor on every street throughout our town, but more rains were coming and by nightfall--the REAL nightfall--the kind without electricity, tropic rains were pouring and pounding down in sheets. 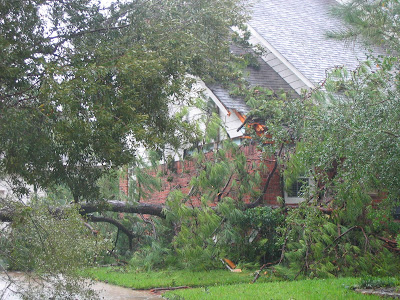 Lightening strikes hit the ground like pinball machines. We listened and shivered in spite of the heat. AND yes, it was most certainly hot. Without air-conditioning, life is different. Without AC, living by candle and flashlight, we morph into little lost panting people. It's not fun.
After a few days passed, I began to notice something. Without the intrusion of cell phones, iPods, television and electronic games, our family talked more. With neighbors too, not just the people next door—we held conversations with people who lived blocks away. And our family actually played board games, read books, even listened to the radio! Sometimes we listened to music, but mostly to emergency channels. There were dismal accounts of destruction, heartbreaking tales of heroic help and story after story of suffering and loss. . .the true definition of “hard” news.
I tried my best to keep things clean. My broom and mop were in constant use. There was always a sink full of hot sudsy water. But without air-conditioning, every room revealed a distinct smell. The kitchen smelled like onions and other food-type smells. The study had a bookish wafting about it and the family room started to take on the odor of sweaty, mud-caked family. Not so good.
I noticed something else too. You would think after all the sweating and not eating a decent meal, that I would have dropped a few pounds, but the scale stuck in the same place. How was that possible? There I was--going all “frontier woman” and not a blessed pound melted off. Good grief! And let's just say it now, without hair dryers we women started to look a bit ragged. But thank God for caps--caps with witty words, caps with rhinestones, or with pretty bows--hiding split ends, and crazy bed-head cave-woman hair.
Then our clothes started getting gamey. The laundry room was definitely fermenting its own unique smell after only three days without power. So I decided to hand-wash a load in the bathtub. I used a large seafood boil spoon to stir the tub-o-clothes, (like Granny on The Beverly Hillbillies), then hung 'em out on a clothesline I strung up in the backyard. Our underwear now visible to the world, I began to feel vulnerable.
For me, there was a low point one day--only one. The whole situation was depressing. So I opened my Bible and came across a passage about thankfulness. Hmmm—why wasn’t I more thankful? Things could definitely be worse. Our family was safe, our home intact. There was food on the table, a gas range to cook on, candles, batteries and ice. My attitude changed once I began to focus on the positives of our circumstance, not the negatives.
Our power came back on a week later. And when the lights and AC came on, the cap came off my head. My hair started looking good again. The smells in every room went away too, replaced by the familiar and exotic scents of room deodorizers in outlets throughout the house. But the conversations also went away. Poof! So did the board games, the neighbors as well.
And you know what? A part of me began to miss the kind of camaraderie and fellowship we experienced with each other and with those around us in the wake of the storm. I appreciate and am thankful for the little things in life more too.
I hope we never experience a storm like that again. But just in case, I’m stocking up on batteries, canned food, good books and rhinestone caps. You never know.
Posted by Linda Kozar at 3:02 PM