An Interview With Lil' Ole Me (Linda Kozar)

An interview with Moi...
on
my latest release 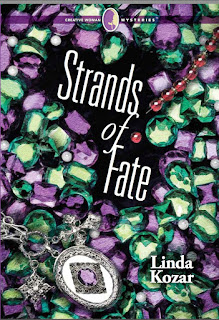 Where did the idea come from for the book?

I was hired by a publishing house to write this cozy mystery with a craft theme. The title was already picked out as were the character profiles, settings, etc. My job was to flesh out the characters and write the story in under six weeks. I did it in four and have the gray hairs to prove it. Oh, wait...no I don't. Thank you Loreal.

What genre does your book fall under?

Strands of Fate is a cozy mystery, meaning that it is a mystery without all the blood and gore, more in the tradition of an Agatha Christie whodunnit.

Which actors would you choose to play your characters in a movie rendition?

Maureen O'Hara in her prime would have been perfect for the role of Shannon McClain! But alas...maybe Jessica Chastain? She has red hair and is a fantastic actress. Now for the role of  the brooding Michael Stone, hmmm, I guess Patrick Dempsey or Matthew Fox would work nicely.

What is the one-sentence synopsis of your book?

Strands of Fate will introduce you to Shannon McClain, who has been in mourning since the tragic death of her husband three years ago. With two children to raise and her money running out, she receives a mysterious letter from the United States, informing her she has just two weeks to claim a large inheritance -- part of which is a fortune in jewels that can only be found by solving cryptic clues stitched in a needlepoint by her late grandmother. But she is blindsided when she meets an aunt and uncle she never knew existed, who are most unhappy she has arrived.

You'll share Shannon's fear and excitement as she uses the last of her late husband's insurance money to travel with her best friend Coleen from their small village in Scotland to a quaint town in the northwestern United States.

But right before they are to leave, she finds a threatening note nailed to her door -- written in red ink, dripping like blood.
"Stay away from Apple Grove... or else," it warns.

Will your book be self-published or represented by an agency?

How long did it take you to write the first draft of your manuscript?

As I said, I was on a very tight deadline. Mine is the first book in the series, all books written by different authors about the same characters. Since I was writing the first book, all the other authors were anxious for me to finish so they could get started. Hence the hurry. Good thing I work well under pressure. Plus, I had to write it during the time of year I care for my mother who has Alzheimers. My sister, brother and I take turns caring for her. So that was a bit tricky in terms of meeting my deadline. But I worked it out by getting up super early every morning to write. Mom always sleeps late, a real blessing for that project!

What other books would you compare this story to within your genre?

Although I am branching off into historical and contemporary romance now, this book fits nicely in the cozy mysteries I've done in the past. My other series was "When The Fat Ladies Sing." My very first editor, Susan Downs thought that up. The books are Misfortune Cookies, A Tisket, A Casket and Dead As A Doornail and are Kindle books. I still love writing mysteries however and will probably always produce a few here and there.

What else about your book might pique the reader’s interest?

This series incorporates various crafts. If you knit, you'll enjoy the little group of ladies who call themselves "The Purls of Hope." They get together each week to knit and unravel mysteries...

Strands of Fate also includes jewelry making and silversmithing techniques. Shannon McClain learns the technique for casting silver jewelry designs. My friend Dannelle Woody (www.dannellewoodyjewelry.com) was my source for the how-to's, so everything is accurate, tried and true!

Thanks for reading! Next Wednesday, please visit the following fantastic writers and friends to read about their new books or works in progress (both fiction and non-fiction):

Sharon Leaf
author of
Lady and the Sea
www.sharonleaf.com 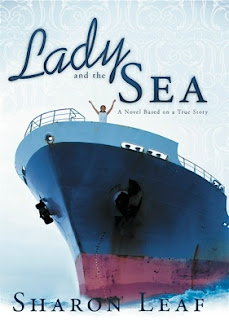