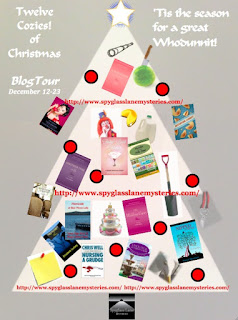 December 13, 2012
We’re on to our second cozy mystery giveaway! In case you missed it, we announce the winner of yesterday’s giveaway here.

Today, we’ll be giving away the gardening-inspired cozy, NIPPED IN THE BUD by Susan Sleeman! Hurry up and ENTER TO WIN.

Here’s a bit about the book:
WHEN YOU FIND YOUR BOSS PUSHING UP DAISIES. . .
Life in full bloom, landscape designer, Paige Turner, scores her first landscaping contract to spruce up the park, her radio talk show shoots to number one, and her retail shop is simply blossoming. Yes, her life is a bed of roses. Until she finds City Manager, Bud Picklemann served up on the blade of her favorite shovel mere hours after she’s threatened to have his head on a platter, then the thorns come out. And there is none thornier than the local police chief declaring Paige the one and only suspect and threatening to plow her under.YOU’VE GOT TO FORMULATE A PLANT OF ATTACK . . .
Paige teams up with dashing attorney, Adam Hayes to weed through the list of suspects, and clear her soiled reputation. A bigmouthed Parrot who often spouts Mr. T-isms, and a giant pickle mascot join in quirky Paige’s quest to once again cultivate control of her life.
Posted by Linda Kozar at 9:37 AM