Into The Fog--by Linda Kozar

Mine to Keep--A Short Story by Linda Kozar 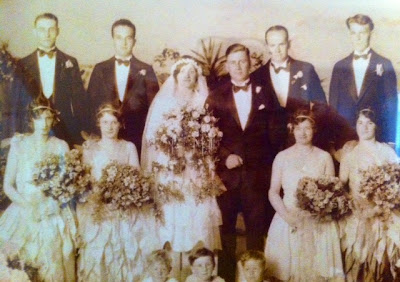 I swallowed hard, steeling my will against the rising tide of dread. Grasping the cold brass knob, I pushed and the heavy mahogany door ticked open with surprising ease. To a grand foyer, the grandest foyer I'd ever seen. Pausing to take in the sight, I turned full circle. An elegant ambience of crystal chandeliers, wood floors burnished to an aged sheen and a checkerboard of ebony-framed photographs along the wall. A timeline of family history, the wall held stories, whispered of legends, hinted at secrets.

The charm of the photos summoned me to look closer and survey the details. The solemn faces of immigrants in a copper wash of sepia, Victorian beauties coifed in impossible hats, a broad-shouldered crew in rowboats, white-smocked babies with rattle scepters, and fresh-faced boys in uniform photographed in the stark sincerity of black and white. Family photos from the 70s, in overexposed colors as vivid and unnatural as the fashions. Pimply teens in plaid pantsuits and smiling women, hair curled to stiff cornucopias. Linear lives measured in shutter clicks. Moments in time caught in a net of film and a liter of chemical.

I followed the line of photos on the wall, daring to reach out and touch one. The change from film to digital marked a paradigm shift in technology--an implausible leapfrog from Hell to Valhalla. Colors suddenly vivid and real seemed to jump out from modern frames; silhouettes pixelized and photo-shopped to perfection--redefining reality. The faces, the voices, ectoplasms drifting through plaster and sheetrock, treading water at the ceiling, eavesdropping on conversation and content. The faces of those who loved and were loved.

Strolling with familiar ease through the rooms and corridors, I sank into the comfort of an overstuffed wingback chair, and lolled backwards onto a tufted velvet divan. With the house so still, so quiet, my ears tuned in to the slightest sound. I could almost swear I heard people conversing in the parlor. And there were other sounds as well. Scraping for instance. Aunt Agnes, one leg shriveled by the polio, dragged her cane when she walked. And Skeeter, our favorite Lab used to skitter across the polished floor when he ran.

And the melodious voices of children echoing through barren hallways, bouncing balls or pinging pebbles in hopscotch squares. Voices resonating through empty rooms once filled with posters, school banners and trophies.

Later, I witnessed apparitions--newlyweds crossing the threshold, presiding over ghostly dinners, babies crying, crayon drawings hanging like masterpieces on the refrigerator. Though I could scarce believe it, I saw gossamer images of children grow up before my eyes; the chubby limbs of youth grown lean and long. Young lives filled with promise. Dreams lofty as tree houses.

Every plank and timber, tile and joist is steeped, infused, and saturated with memories. The place is crowded with them. But don’t rely on my testimony. I’m an old woman. My eyes are dim, memory foggy, legs stiff as corn stalks. Perhaps I see and hear things that are not really there. Perhaps I only wish they were there.

Come and see for yourself. In fact, today is a good day to visit. Maybe your last chance.

Today is moving day. I watched as men in jumpsuits packed, wrapped and carried my life away. The curtains gone--beds and mattresses, dressers, chiffarobe, chairs, divans—all out the door. Strangers hard at work, gathering bushels of history, of sweet memories. Life’s triumphs and tragedies bubblewrapped and hidden away in double-taped boxes.

The objects that meant so much to me will no doubt find their way to tag sales. The pictures, a mere curiosity for strangers to wonder about. But the memories, the love are mine to keep. My heart overflows with the extraordinary treasures of an ordinary life.

One last look, a longing glance, and I closed the door, which clicked shut with surprising ease. To a grand foyer, the grandest foyer I'd ever seen.
Posted by Linda Kozar at 11:18 PM No comments:

Why is a Raven Like a Writing Desk? by Linda Kozar 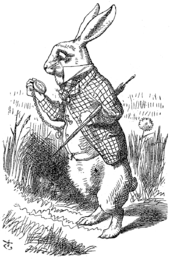 A raven like a writing desk? Though I'd read Alice in Wonderland as a child, I seem to have skipped over that question.

If your memory needs refreshing, as does mine, the quote comes from a tea party Alice attends in the company of the March Hare, the Mad Hatter and the Dormouse. The Hatter poses the question:

"Have you guessed the riddle yet?" the Hatter said, turning to Alice again.
"No, I give it up," Alice replied. "What's the answer?"
"I haven't the slightest idea," said the Hatter.
"Nor I," said the March Hare.
Alice sighed wearily. "I think you might do something better with the time," she said, "than wasting it in asking riddles that have no answers."

Alice's Adventures in Wonderland, by British author Charles Lutwidge Dodgson, better known under the pseudonym Lewis Carroll tells the story of a girl named Alice who falls down a rabbit hole into an upside-down world of equally topsy-turvy, anthropomorphic creatures. Classed in the literary nonsense genre, Alice in Wonderland sets a permeable barrier between logic and illogic, setting the stage for delightfully ridiculous dialogue.

Readers have been clamoring for the answer since the book first released, so much so in fact, that Lewis Carroll added a preface to the 1896 edition of the book:

Enquiries have been so often addressed to me, as to whether any answer to the Hatter's Riddle can be imagined, that I may as well put on record here what seems to me to be a fairly appropriate answer, viz: 'Because it can produce a few notes, tho they are very flat; and it is never put with the wrong end in front!' This, however, is merely an afterthought; the Riddle, as originally invented, had no answer at all.

Unfortunately, his answer did little to satisfy people, so they set out to venture their own solutions to the riddle--none of which made much sense or offered a satisfactory explanation. No one, it seems, was willing to accept the lack of an answer to a nonsensical riddle. Considering the source of the riddle, the Mad Hatter, one has to wonder why.

Postscript: In 1976 Carroll admirer Denis Crutch pointed out that in the 1896 preface quoted above, the author had originally written: "It is nevar put with the wrong end in front." Nevar of course is raven spelled backward. Big joke! However, said joke didn't survive the ministrations of the proofreaders, who, thinking they understood the author's intentions better than the author, changed nevar to never in subsequent editions. The indignities we authors suffer! Sure, we make up for it in money and groupies, but still, if in some book (e.g., one of mine) you come across a line that really clanks, be assured: It was funny before. (http://www.straightdope.com/columns/read/1173/why-is-a-raven-like-a-writing-desk)

So, it seems, Lewis Carroll had the last laugh.

But the irony raises another question--how should an author respond when readers "read" too much into a story?
Posted by Linda Kozar at 11:07 AM 2 comments: