Growing Up Haunted: A True Testimony--Part 2--By Linda Kozar 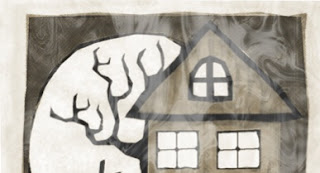 Growing Up Haunted
(Part 2 of  5)
July, 1965
We lived in a relatively new ranch-style home in New Orleans. Though in the midst of a sweltering July, our only method of beating the heat was a large attic fan that opened from the ceiling over a hallway--that and a few well-placed box fans. The attic fan reminded me of a helicopter. The blades were enormous. Supposed to suck the hot air out. So much for that.
Anyway, as I said, it was the middle of July and stifling, humid. The kind of heat that clings to you and won't let go. And not a natural breeze to speak of, save for the fans, stirring the hot air. My sister and I were playing in the hallway with our dolls. My brother was only a year old, sleeping in his crib in my parent's bedroom. The door to the bedroom was open and my mother was sitting on the bed, playing with the Ouija Board. Since the rest of the family lived on the other side of the Mississippi River and my mother didn't have many friends in New Orleans, she'd taken to playing the game by herself.
And, it turned out, she'd found a friend after all. She was in daily communication with something or someone from the spirit world beyond. (Of course I had no idea about that at the time. My mother told me the truth years later). She told me how she'd started out asking it questions.
Soon, a definite personality began to answer her.
Mom was fond of an old television show, The Ghost and Mrs. Muir, about a woman who moves into a home haunted by the ghost of a sea captain who falls in love with her--sort of a precurser to today's paranormal romance in secular publishing. Anyway, in large part due to the influence of that show, my mother was not put off by this supernatural friendship. She initiated conversations with it and vice versa.
On this particular day, in the humid, sweltering heat--without warning, a chill wind as frigid as a norther blew throughout the house. It blew the curtains high, plastered our hair back and ended almost as quickly as it began.
My sister and I ran screaming to our mother who was just as terrified. She began reciting the all-purpose prayers she'd grown up repeating. But her prayers did not calm our fears. She had no real belief to back them up. And she would need real faith to fight what leapt out of the Ouija Board that day.
Posted by Linda Kozar at 9:53 PM